Self Determination Theory or SDT is, I think, the most complete scientific account of motivation and engagement available today.

That means I do not take SDT to be a perfect nor complete account of motivation and engagement which means that legitimate criticisms are welcome.

My name is Don Berg.

Recently I was excited to hear a potentially credible expert criticize Self-Determination Theory in an interview on the Progressively Incorrect podcast.

The guest was Professor Paul Kirschner.

I looked up what the host called Kirschner’s seminal paper and a couple other blog posts in which he and his coauthors mentioned motivation.

I also bought two of his books.

Edward Deci and Richard Ryan, the founders of SDT, were cited several times in association with the term motivation in the blog posts, so it is clear that SDT was Kirschner’s target.

Unfortunately, his criticisms are out of date.

He had the following concerns: measures are based on unreliable self-reporting, motivation and engagement are not good proxies for learning, giving students choices does not improve their learning, and behavioral engagement can hide shallow learning.

(Note that he claims the only type of learning is what I call deep learning.

But I find the shallow versus deep distinction helpful because as a psychologist I insist on taking into account more of human experience than the rarefied dynamics of academic instruction.)

Given his inadequate understanding of Self Determination Theory, his concerns will seem well-founded to an uninformed audience. 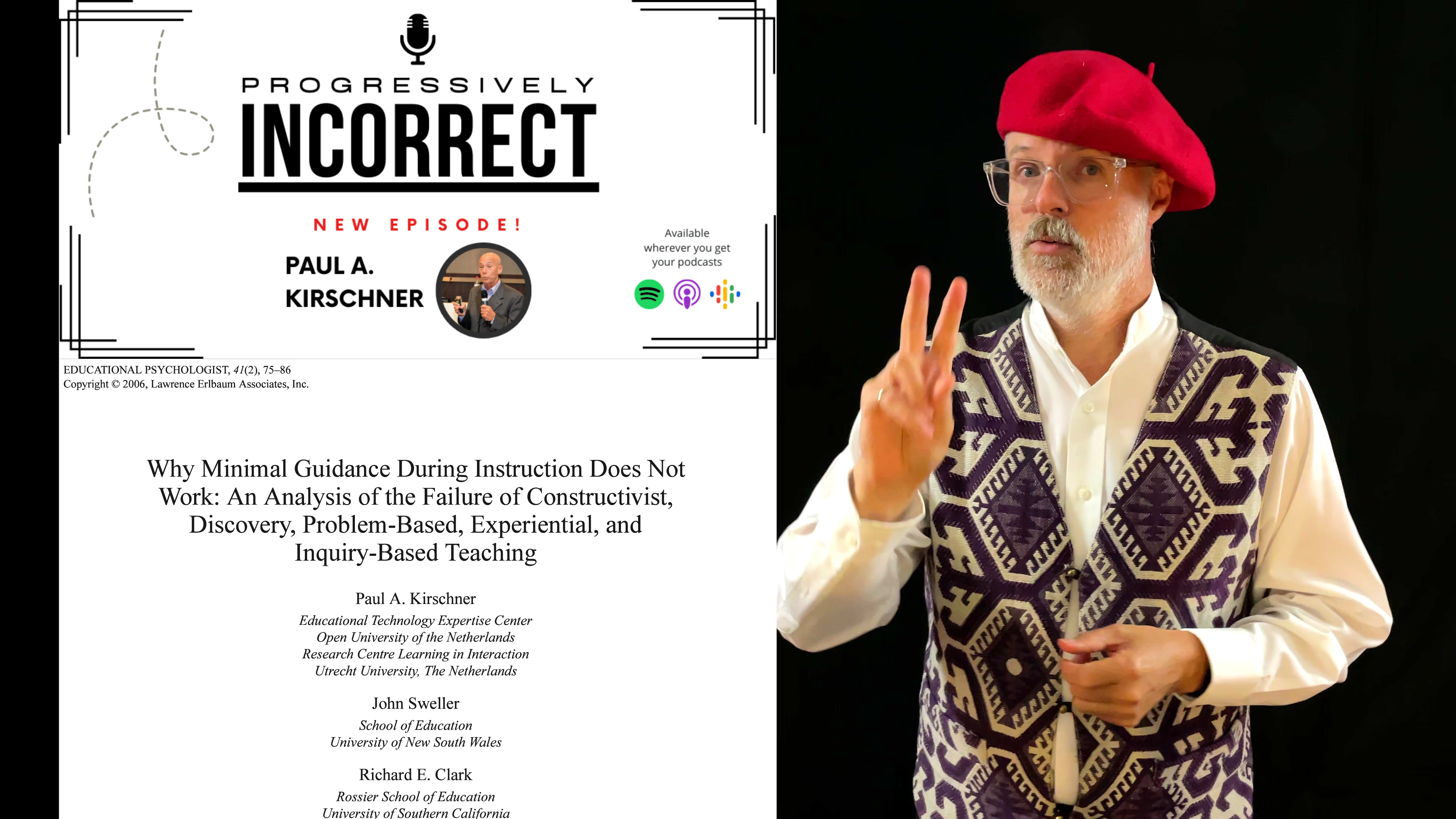 Regarding self-reports, he is correct that when there is an external objectively verifiable standard against which they can be compared, they are extremely unreliable.

However, motivation is not an external property of a person with a standard against which the reports can be compared.

Early studies did compare their measures with related objective measures to ensure that their constructs reported on real and useful properties of people, so we are standing on the shoulders of giants on this point.

If he believes that people may be prone to mis-reporting their own internal states then he needs to review the extensive validity and reliability studies that constitute most of the early literature in this field.

Indirect measures are not unusual in science.

When scientists were trying to generate predictions about the behavior of gasses based on the positions and trajectories of individual atoms they quickly ran into the fact that they could never do enough calculations to make useful predictions.

The solution was arrived at when they realized that they could use statistical generalizations to make good predictions.

The results of the indirect processes are still not precise enough to predict the position or trajectory of any given atom or molecule, but those imprecise measures of gas behavior still do an excellent job of making good predictions.

Motivation is, obviously, an internal experience.

The self-report measures were confirmed to be valid and reliable because the results make good predictions about human behavior.

They are still not precise enough to predict individual states of mind and behaviors across all situations, but the model put forth by the SDT community is good and useful most of the time.

Standing on the shoulders of giants is the norm in science and if he wants contradict the established science Kirschner needs be more specific in his critique and share relevant evidence. 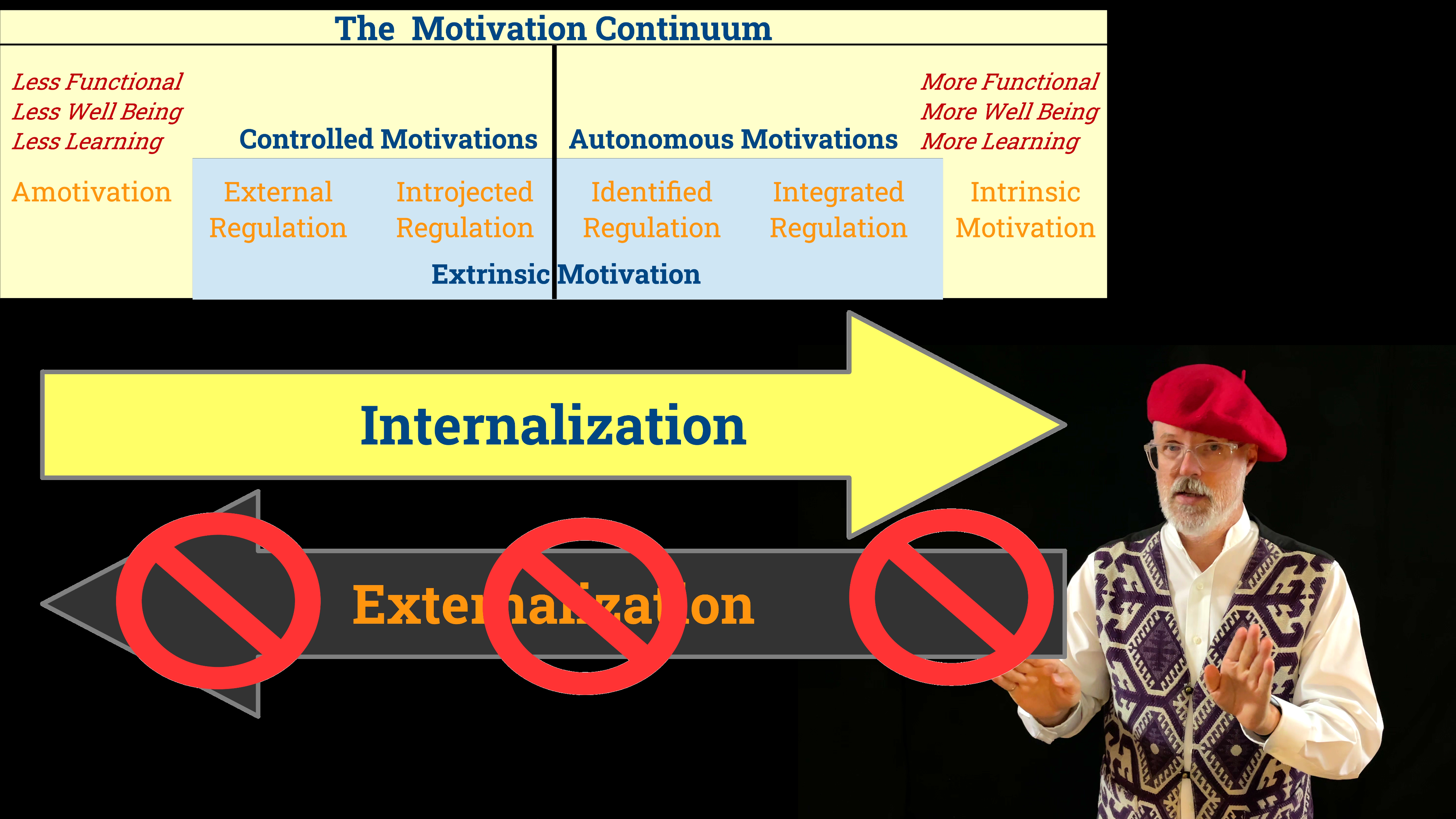 Motivation According to Self Determination Theory

Are motivation and engagement poor proxies for learning?

Once again, it is important to note that his concern is based on a misconception about SDT.

In each criticism he emphasizes the dichotomy of intrinsic versus extrinsic motivation.

This is a conception that was abandoned long ago because it is an oversimplification.

Motivation is currently understood as a continuum.

Those four types of “regulation” are all extrinsically motivated.

Remember I said from least to most functional.

That means that there are well-being consequences that follow from each of those forms of motivation.

When the well-being consequences are negative that has detrimental effects on learning.

Getting back to Kirschner’s pseudo-critique, in the SDT community we no longer refer to the intrinsic/extrinsic dichotomy.

We generally refer to motivations that are either more controlled or more autonomous.

On the continuum we make the spit down the middle.

Two forms of extrinsic motivation are on the side that has positive consequences for well-being and learning.

But far more important is that SDT recognizes two processes, called “internalization” and “externalization,” that change what motivations are experienced over time.

The point being that starting out in the range of controlled motivations is not a problem for learning, as long as internalization is facilitated and externalization is prevented.

Thus we get to the irony of Kirschner’s comments.

He asserts that proper direct instruction gives students feelings of accomplishment that then lead to better motivation and more engagement, which is true.

But he has made this assertion as if it were contradicting SDT, which it does not.

He is actually making the same predication as SDT.

If he had taken the time to understand internalization as a consequence of need satisfaction he would have seen that the perception of competence is a key part.

“Feelings of accomplishment” indicate the satisfaction of the need for competence.

The other two primary psychological needs are for autonomy and relatedness.

In his podcast interview Kirshner lamented educators who claim that students making choices will improve their learning.

Once again SDT does not argue the opposite, we agree that merely giving them choices will not inherently lead to better learning.

Research by Xue-hua Bao and Shui-fong Lam published in 2008 showed that the need for autonomy is not satisfied by mere choice making.

Valued others, like trusted moms and teachers, can make choices for a child and the child will feel that the chosen activity was almost as autonomously motivated as a choice made by the child, him- or herself.

Notice that I said “trusted” moms and teachers.

The research suggests that the higher the level of relatedness with that valued other the more autonomously motivated the child will feel about the activity chosen FOR the child BY that other person.

Choice making can be an important support for autonomy, but not always.

Self Determination Theory is helpful for discerning when choices make a difference and when they do not.

When, for a student starting out on the controlled side of the continuum, those psychological needs for relatedness, autonomy, and competence are satisfied, then they will internalize the requirements of the situation and their motivations will become more autonomous and their engagement can become more agentic.

Agentic engagement is a social process in which a student puts their own opinions, ideas, and other aspects of themselves into the learning situation in order to improve their ability to extract value from it.

Agentic engagement is one of the most recent developments in SDT; it has only been in respected scientific journals since 2011 (Reeve, & Tseng, 2011).

In January 2022 ASCD’s EL magazine put out a special issue entitled Motivate and Engage! and there was not a single mention of agentic engagement (Fisher, & Frey, 2021; Gupta, & Reeves, 2021).

None of the leading educators published in that popular educational magazine, nor Kirschner, has caught up to the leading edge in the field from a decade ago.

(Clearly the SDT community has not figured out how to get their science to be communicated beyond the scientific journals.

They have started a more concentrated effort to accomplish that with the founding of the Center for Self-Determination Theory, but they still have a long way to go.)

Keeping up with every development in this large and growing field of scientific research is a challenge, even for insiders.

But when Kirchner conveniently overlooks the most central claims of the theory that have been in place since the 1970s, his comments lose credibility.

Thus, his comments are pseudo-criticism since he doesn’t appear to understand the theory he is criticizing.

Kirschner’s Challenge to My Book

Now there is one way in which Kirschner’s critique may be challenging my work.

He points out that motivation and engagement are not good proxies for learning.

In my forthcoming book one of the presentations of the SDT model would seem to claim that it is a good proxy for learning.

I portray a linear causal chain that puts learning as a by-product of motivation and engagement.

It would appear that we are on two different sides, but I readily concede his point.

In another diagram in my book I also make the claim that learning situations have two dimensions: structure and quality of experience.

It seems clear to me that Kirschner and his colleagues are advocating for improvements in the structure of learning situations in the form of pedagogical improvements.

But, his criticism can be construed as implying that the quality of experience doesn’t matter.

He and his coauthor try to avoid this construal by saying, “Don’t get us wrong.

“We love having learners being motivated and engaged and strive for them to be just that.

“Motivation and engagement are, in themselves, excellent paths on the road to learning.

“However, motivation and engagement neither can replace learning nor be a proxy for learning.”

If this is their true sentiment, then we would probably be in agreement if they were not presenting a caricature of SDT.

In SDT no one has ever claimed that “motivation and engagement … can replace learning.”

The theory is clear that they are, “excellent paths on the road to learning.”

Now we have to be a little more precise about their negation of the proxies claim.

Are they claiming that traumatic experiences and the negative states of mind that occur at the controlled end of the motivation spectrum are not relevant to learning?

Given their impoverished notion of motivation that is a plausible interpretation.

I wonder if they recognize how, in addition to that of competence, the needs for autonomy and relatedness have causal roles in learning.

I also wonder if their conception of pedagogy includes the necessity of structuring the social situation within which instruction takes place.

If they do not recognize how detrimental to learning it is to remain on the controlling end of the motivation spectrum then their claims are suspect.

If they do not recognize that the cultivation of more autonomous motivations and agentic engagement are important aspects of properly structuring learning situations then again their claims are suspect.

But, I can’t make a determination based on the texts and the podcast that I have consumed thus far. 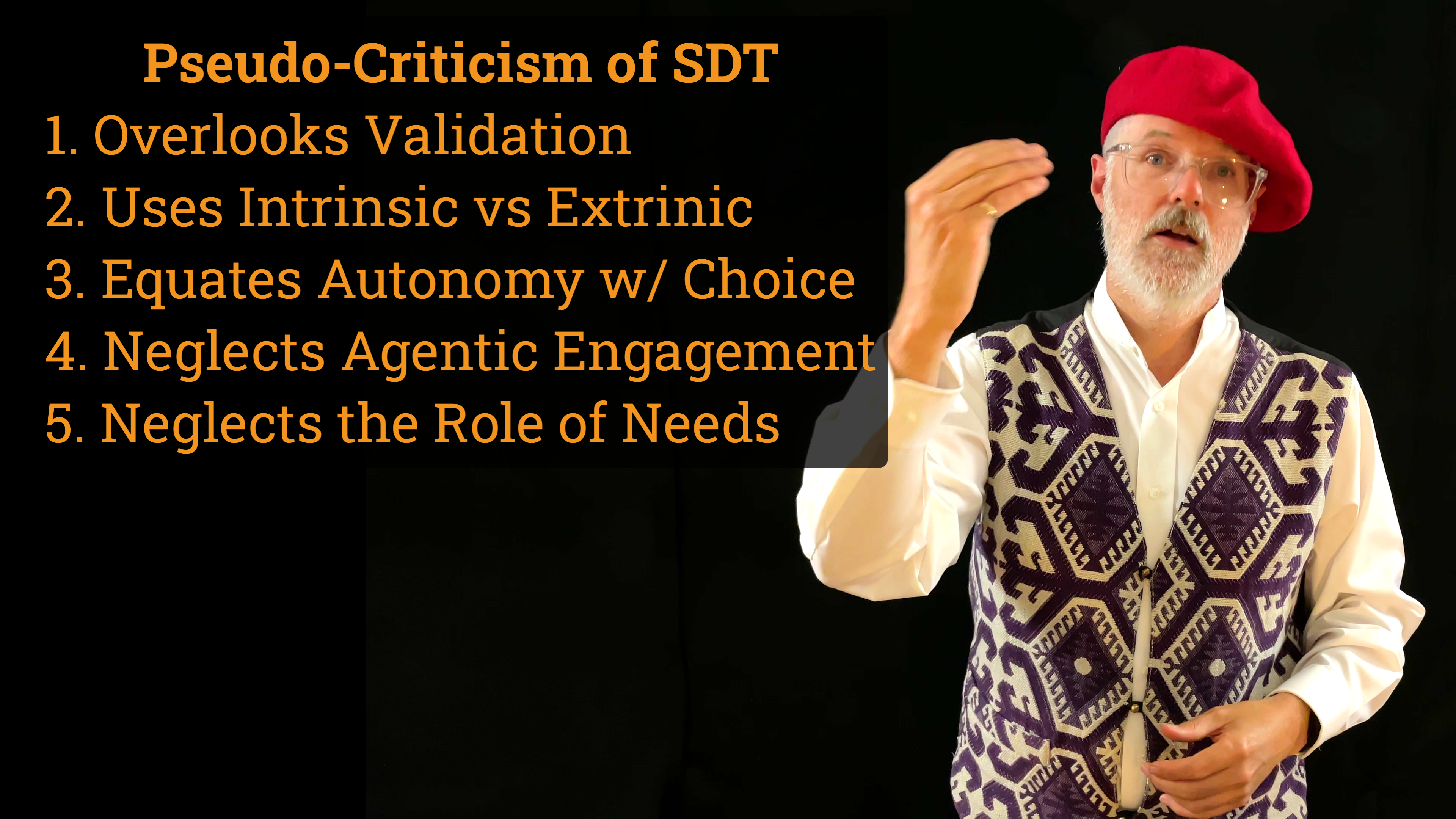 Spotting Pseudo-Criticisms of Self Determination Theory

To conclude, you can spot pseudo-criticisms of Self Determination Theory if the supposed critic:

1) overlooks the studies of the reliability and validity of the self-report measures,

4) fails to include agentic engagement, and

5) neglects to counter the central causal claim of SDT that the satisfaction or thwarting of primary psychological needs will affect well-being, motivation, engagement, and learning.

From an SDT perspective these are all straw men that critics may use to misrepresent SDT to an uninformed public.

In order to offer a conciliatory perspective I have posited two broad factors to be necessary to learning: situational structure (such as skilled instruction) and experiential quality (such as need satisfaction).

If critics disagree that the second set of factors is necessary then it would be helpful if they would be clear and specific about their objections.

Demonstrating a good grasp of the theory would be a very helpful starting point for criticizing it.

SDT forms the basis for my holistic perspective on education to learn more about that watch my video, “What is a holistic approach to education?”