Why is the difference between equity and equality controversial?

There is a controversy over the difference between equity and equality, although, you may not have noticed if your media bubble only feeds you one-sided information.

Some cynics claim that if we fire off the silver bullet of equity the result will be a shizzle storm of unintended consequences.

Meanwhile some fanatics seem to believe equity is all butterflies and rainbows.

Vice President of the United States Kamala Harris is a notable figure in favor of equity while on the opposing side is the famous conservative scholar Jordan B. Peterson.

Expressing the Difference Between Equity and Equality

Probably the clearest and most concise statement in favor was made by Olivia Chapman in a TED Ed Club Talk:

I’m not saying that equality is a bad thing. Rather that it’s not the best option for every situation.

As we can see, equality represents sameness which in some situations is a great thing.

Equity, on the other hand, represents fairness, which in all situations is the best thing.

The opposition was probably most clearly stated by theologian Thaddues Williams:

Therefore you need some top down authoritarian government to cram an ideology down everybody’s throat if you’re going to realize your goal of equity.

In his view pursuing equity is an abomination because it necessitates all the horrors of totalitarianism.

Where both sides seem to agree is that equity should be defined as equality of outcomes.

And that is where both sides got it wrong. 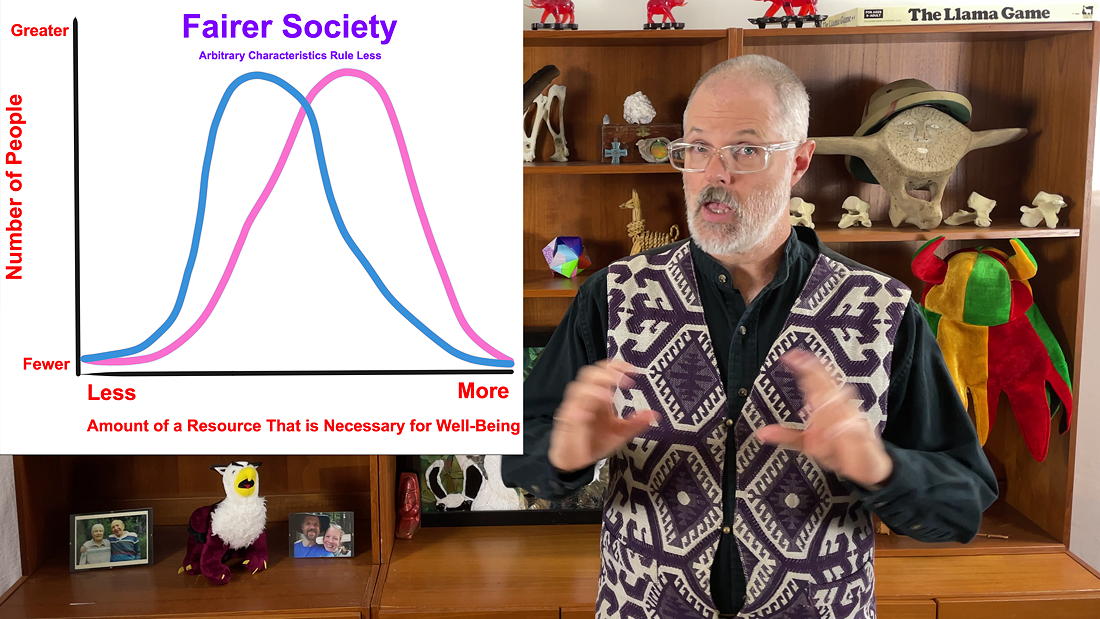 My name is Don Berg.

Before I show you how both sides got it wrong I want to show you what they got right and how the argument itself, upon closer inspection, is actually ridiculous.

Everyone across the board agrees that arbitrary characteristics should not determine your outcomes in life, they should be determined by your will and, based on your circumstances, the choices you make.

Everyone also agrees that the State should not UNnecessarily interfere in people's lives.

Therefore, if we achieve some form of governance that ONLY interferes in people's lives when necessary AND ensures that everyone's choices determine their fate, then we have created a fair society, which is what everyone wants.

Let’s map this out.

Here is a graph where the horizontal axis is the amount of a resource that is necessary for well being.

The vertical axis is how many people have that amount of the resource.

Here’s the distribution for one possible type of a characteristic (such as race or gender) that should NOT have any effect on how that resource is distributed.

Here’s the distribution for a different type of the same characteristic.

When they are put together then we see that the distribution seems to be affected by that characteristic.

This is what is meant by an UNFAIR distribution.

How much of a necessary resource you will have in life should NOT be determined by the random chance that you were born with one type of characteristic and not another.

In order for a society to be fair you cannot have a group that happens to share one arbitrary characteristic, such as being women or being darkly complected, and yet the vast majority of them are piled up at one end of the distribution of a resource that is necessary for well-being.

When an arbitrary characteristic, such as being male or white, has more influence than the life choices of people in that population in determining whether they have more or less polluted air and water, more or less healthy food available, more or less access to healthcare, etc. that means that the society is UNFAIR.

A fair distribution changes the relationship between the lines for each sub-group so that they have much more overlapping territory with other groups in the diagram.

I believe all reasonable people can agree on what I’ve just laid out is a logical view of fairness.

Differences may exist but they will be so subtle that they are hardly noticeable.

The real conflict is about what actions by the State, in the quest to improve the fairness of society, count as NECESSARY.

Ms. Chapman and those arguing for equity assume that society will be “fair” when broadly similar outcomes occur for all the various groups that share arbitrary characteristics, such as gender or race.

Ms. Chapman, and others in her camp, have made their arguments in a way that suggests that unquestioning devotion to equity will make the world all cupcakes & rainbows.

It is an argument FOR fairness.

The argument is that our society is not fair because of the systematic discrepancies in the distribution of key need-related outcomes across populations of people.

AND due to our history, State action is required to improve the fairness.

Here is a table to help us keep track of our considerations.

There are two things to notice about this argument for fairness.

First, it is about the pattern of distribution for groups.

Second, it is about broad categories of outcomes.

The distribution of broad outcomes for groups are taken as diagnostic indicators of the fairness of society.

This argument makes no claim about the fairness of any specific outcome for any particular person.

The argument ignores both individuals and specifics.

For some folks this argument is automatically interpreted to be a call for coercive redistribution of resources using the power of “The State.”

They find such calls to be alarming because it suggests to them that anonymous State bureaucrats backed up by heavily armed law enforcement officials will interfere with their lives by coercing them unnecessarily.

And that would be UNfair.

The opposition, such as Mr. Williams, is arguing AGAINST allowing totalitarian governance, due to its inherent UNfairness.

Remember that they share in the assumption that equity is about equality of outcomes.

But when the cynics talk about it they posit specific outcomes for particular individuals.

They take the broad diagnostic outcomes that supporters present and reframe them to be specific measures that would be used to create accountability for the equality of the outcomes in particular individual cases.

Given the fact that the lefties don't include anything in their argument that would suggest otherwise it might seem reasonable to speculate on what accountability might look like.

It is also a clever move rhetorically because it reveals exactly how irresponsible pursuit of equity could lead to absurdities, Ms. Chapman's enthusiasm not withstanding.

But that reframing does misrepresent the argument that was made.

Rather than seeing supporters as well-meaning fellow citizens grappling with the complexities of governance, they use a selective and overly simplistic reframing to transform them into hated enemies.

In any case, with a slight adjustment to the table we can see how it is that the opposite sides avoid civil dialogue by generating an empty controversy and consistently talking past each other.

Let's reframe the table so that we can see how this plays out in regards to the fairness that everyone actually wants.

Starting with the argument FOR fairness, we see that it would be easy for them to conclude that those who make statements against their position must be against fairness.

Those cretins also seem to be arguing for unfairness, which means they must have bad intentions.

The fact that the argument does not address the possibility of opposing unfairness creates the ambiguity that leads them to assume anyone who opposes them must be an enemy.

Isn't it obvious that the anti-Equity crowd is promoting racism, sexism, classism, etc!?!

Only bad people support bad things, therefore they are our enemies!

Now let's look at the opposition argument against UNfairness.

From this perspective the logical inevitability of totalitarian government is a slam dunk.

These folks figure since we're the good guys who are against UNfairness that makes them for UNfairness, so that is bad.

Our position CLEARLY IMPLIES that we are for fairness and since they are against us that makes them against fairness.

Therefore, they must have nefarious intentions.

The fact that the argument does not explicitly address the possibility of supporting fairness creates the ambiguity that leads them to make the same logical leap that anybody who opposes me must be my enemy.

Isn’t it obvious that the other side wants the government to take control of our lives!?!

Therefore, the pro-Equity crowd is secretly working to achieve totalitarianism!

They are bad people!

Here's a table to show us the middle way.

We all share in the presumption that arbitrary characteristics (race, gender, family wealth, etc.) should not determine our outcomes in any given arena of life, whereas our choices in the light of our individual circumstances should determine those outcomes.

Inspired by a consensus definition of equity from the National Academies of Sciences, equity is properly defined as a combination of:

- parity among groups in regards to getting their needs satisfied,

But, this definition only works if we also clearly define needs.

Elsewhere I have addressed the science of the differences between primary, secondary, particular, and derivative needs.

For the achievement of equity this is where the extremists got it badly wrong.

If we insist that equity be defined solely in terms of any equal outcome, other than need satisfaction, WOULD lead to some kind of disaster, what form it takes doesn't matter.

Drawing on the meaning of equity in the financial realm we should regard equity as the ownership of your own life AND ownership of a fair society in which to live it.

Owning your life and your society are both required.

If you disown the governance that makes society work (which seems to be a tack favored by libertarian extremists on the right and anarchist extremists on the left) then your efforts to maintain control of your life are eventually going to fail.

If you wantonly use coercive government power to right all perceived wrongs (which seems to be a tack favored by authoritarian extremists on the right and communist extremists on the left) then your efforts to maintain control of that government are eventually going to fail.

Both individually and collectively we need to pursue equity, as defined with reference to NEEDS, or we will screw it up in any case.

If an “equality” MUST be used to define equity it must be the equality of need satisfaction.

Using the wrong definition of equity WILL lead to trouble, as will neglecting to define needs in a scientifically valid way.

Broad group data is merely diagnostic and should not be the basis for accountability.

Accountability should be based on triangulating related streams of data regarding need satisfaction, patterns of motivation, and depths of engagement for those who are in specific situations.

In order to treat the inequities we find we need to provide more need support, which may or may not require the RE-distribution of resources.

Despite making valid points, extremists on both sides have been mistaken in their enemy-making assumptions about the other side.

If we can define equity properly, with reference to a scientifically grounded understanding of needs, we can overcome the enemy thinking that is the real problem in our politics today.

Holistic Equity DOT Org is where you can learn more about ways to achieve educational equity in schools by practicing Catalytic Pedagogy.

Thaddeus Williams on Equality vs Equity