I want to introduce you to catalytic pedagogy.

Welcome, my name is Don Berg.

Before I explain my terminology in more detail I want to point out that bad schooling fails to do the job we, as a society, expect it to do because of how a pervasive misconception about learning interacts with the variety of historical accidents that gave us the school system we have today.

That misconception is that education is achieved through the delivery of knowledge, skills, and information by teachers into the heads of students.

That false idea is the source of lots of the intuitions that guide many people’s decisions about how schools should operate.

Take the notion of Back-to-Basics that arose in the 60’s and 70’s here in the USA.

I call it Back-to-Basics 1.0 because in my upcoming book and in one of my videos I propose a new version that I call Back-to-Basics 2.0 which is derived from the psychology of learning, rather than nostalgia for the schooling of old.

The delivery metaphor is wrong; it is more accurate to say that the teachers inspire the students to mentally re-map their reality.

Back-to-Basics 2.0 is a three-step strategic plan for creating a systemic approach to inspiring students en masse, or to be more precise, for ensuring that any school can achieve catalytic pedagogy.

So, let’s dive into what it means to call a pedagogy catalytic.

Catalysis is a term from chemistry that refers to a substance that makes a chemical reaction between other chemicals faster, more energy efficient, and less wasteful.

What I am proposing is that we can be more efficient and effective during the process of instructing children by creating certain conditions around the instructional process.

But let’s start at the beginning with the literal version of catalysis as explained by industrial chemists.

This means that it is not used up in the reaction.

It must, however, take part in the reaction, or we might as well not have it there at all.

So how does a catalyst work?

A catalyst works by providing an alternative pathway for the reaction to occur.

This alternative pathway has a lower activation energy than the pathway without the catalyst.

Here are the two pathways for a reaction.

You can see here that with the catalyst, the activation energy is lower.

As a result of the activation energy being lower, there are more molecules with the required activation energy, and so more fruitful collisions occur per second, and hence, the reaction is faster.

So, to recap, catalysts speed up chemical reactions without themselves being used up.

They work by lowering the activation energy and are used-

- [Chemist 2] The reactions find an alternative, quicker path, and they do not spend so much energy or generate so much unwanted waste.

First, we're going to see how a catalyst can increase the rate of a reaction.

The colorless liquid in this beaker is hydrogen peroxide, and it's actually reacting right now to form oxygen gas and water, but the reaction is too slow for us to see.

Adding a small amount of catalyst can significantly speed up the reaction.

In this case, our catalyst is an orange solution of iron nitrate, which we add to the hydrogen peroxide.

After a short induction period, oxygen is generated much faster, and energy is produced, which is indicated by the rapid fizzing and the quick rise in temperature.

As you can see, once the reaction is complete, the solution returns to the original orange color of the iron nitrate solution, showing that the catalyst is completely regenerated.

The important concept when considering how a catalyst works is activation energy.

For a reaction to take place, an energy hill needs to be overcome.

The height of the hill is known as the activation energy.

The higher the hill, the more energy is needed.

When you add the catalyst, the activation energy is reduced, making the process more efficient.

- [Don] Let’s borrow some visuals from the chemists.

Here is the graph, except instead of showing the reactants and products, we are looking at how students go from their default shallow learning into deeper learning.

Remember that this process happens at some slow rate independent of what we do because human beings are inherently curious about their world and how it works.

The reaction we are considering is the students’ reactions to instruction.

Their inherent curiosity creates a low level background rate, but it is slow, inefficient, and wasteful.

So, applying this idea to pedagogy we can look at those three key aspects of children’s reactions to instruction:

The blue pathway is showing us the activation energy required without catalytic pedagogy.

The red pathway shows us the activation energy required with catalytic pedagogy which is going to result in different rates of energy, efficiency, and waste. 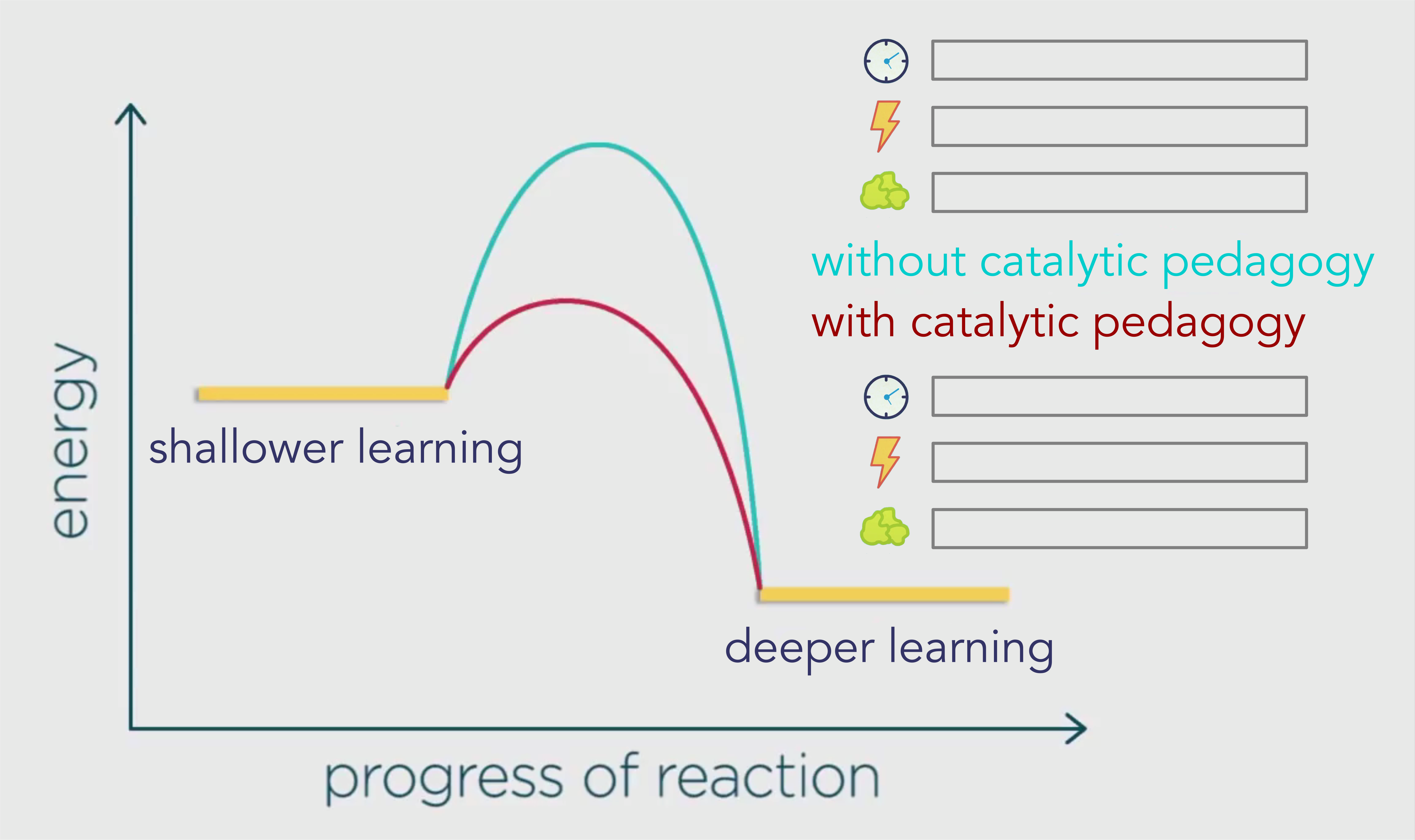 The most important waste to consider in education comes from the epidemic of disengagement that has been well documented in both schools and the workplace, even though it gets very little attention in the media.

For instance, according to Gallup, 70% of teachers report being disengaged.

Based on a combination of expert estimations and direct surveys we can be confident that students are also disengaged at a rate of about fifty to seventy percent.

It is not a stretch to assume that the habits learned in school have an effect on later workplace patterns.

If the pattern carries over then it makes sense of the fact that Gallup reports that the average rate of disengagement in the workplace globally is also 70%.

Gallup estimates that the seventy percent rate of workplace disengagement is costing about $7 trillion per year.

Plus, a 2015 report from the Carnegie Foundation called “Motivation Matters” pointed out that in the USA there is an engagement gap just like there is an achievement gap between minority and majority students.

They also noted that the engagement gap is the more solvable problem of the two.

Next we want to consider activation energy, which I will take to be the role of motivation.

In reviewing prior studies for my thesis I discovered that about thirty years of research in mainstream schools found that the intrinsic motivation and engagement of students declined within each year and over the course of the years through high school graduation.

My published thesis research was about the patterns of intrinsic motivation for students in two schools where instruction is an opt-in for students, the only courses they took were ones that they chose to take.

It should come as no surprise that when children actively choose to take a class they have a better chance of engaging more productively with it.

What I found was that these schools maintain the intrinsic motivation of their students across the years, which is consistent with just a couple of other studies of engagement in similarly alternative schools.

While I looked specifically at intrinsic motivation, the entire group of more desirable internal motivations is called autonomous.

These schools support autonomous motivations in their students by being organized to give children the opportunity to opt-into classes.

This means they expend much less energy getting students activated for making productive use of the instruction they receive.

To put it in the terms mentioned by the chemists, the instructional collisions that occur are more productive.

Putting it this way makes an important distinction between productive and unproductive instructional collisions.

Just because a student has an instructional collision with an instructor in a classroom does not mean that it was an educationally productive incident.

And we cannot always tell the difference between productive and unproductive when the teacher gives the student a passing grade just for having a collision.

When grades and test scores reflect educationally unproductive collisions I call that fauxcheivement, or fake achievement.

I have never met anyone who was successful as a student in mainstream classrooms who did not agree that at least part of the time their success depended on jumping through the hoops or just going through the motions without learning the lessons taught.

In this case you need to know that the State of Massachusetts compels children in the first through sixth grades to attend 180 days of school each year.

Let’s estimate that they will receive about an hour a day of math for those six years, which means that those State public schools expect to take somewhere near a thousand hours to deliver that math curriculum.

Now consider that Daniel Greenberg, who was one of the co-founders of the Sudbury Valley School in Framingham, Massachusetts, taught math for many decades.

He taught the first through sixth grade math curriculum.

Now you also need to understand that all instruction at Sudbury Valley School is completely optional for all students ranging in age from five to eighteen years old.

In this case he taught the entire first through sixth grade math curriculum with one hour a week of direct instruction with lots of homework over the course of just twenty weeks.

He accomplished in 20 hours what the State of Massachusetts expected to take around a thousand.

That is a much more efficient use of the instructional expertise that a teacher has to offer.

But let’s assume that Daniel Greenberg was an exceptional instructor and that when we take catalytic pedagogy to scale we will get ten times less of an efficiency gain than he claimed, so let estimate basic math will take two hundred hours. 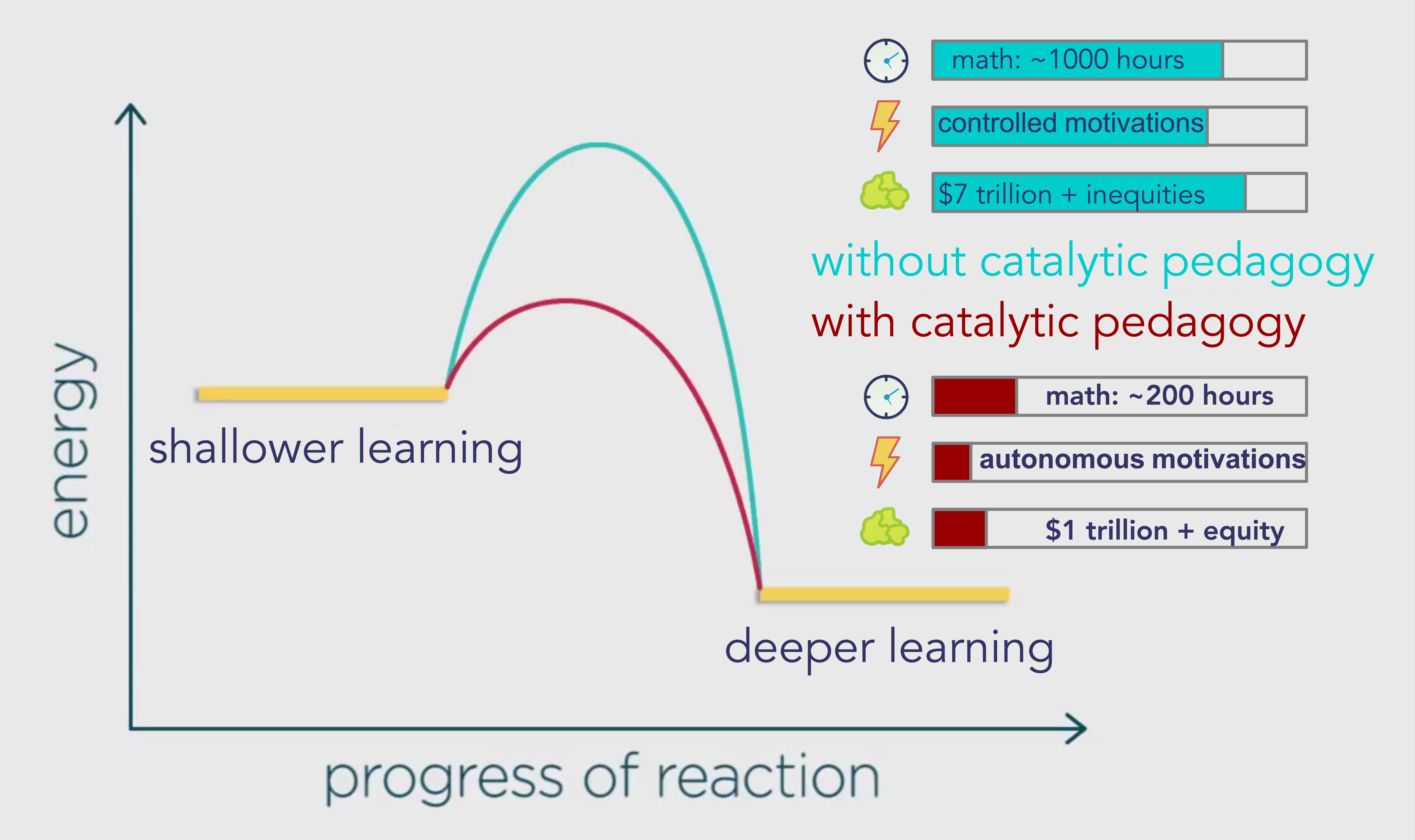 The Meaning of Catalytic Pedagogy

The problem we have right now in the education system is that the mainstream of schooling is too slow to produce the deeper learning that we as a society need to meet the demands of our complex technological age.

Without catalytic pedagogy the amount of energy that we expend to maintain the current rate of student reactions to instruction is too high, the process is too slow, and there are too many waste products.

When we add catalytic pedagogy the activation energy is lower, the process is much faster, and there are going to be fewer waste products though I don’t really know how much money we could save, let’s assume that other factors will still cause a trillion in waste.

Perhaps more important is that I do know that it will bring about much more equity.

So, to clarify the whole phrase “catalytic pedagogy” refers to the context surrounding instruction that schools use to produce more autonomous motivations and more fully engage their students and teachers in instruction.

Making students opt-into classes is one way that can happen, but it is probably not the only way.

There are promising models and practices under the terms deeper learning, democratic schools, rights respecting schools, Comer schools, Montessori, and probably others.

In order for this view of pedagogy to become more prevalent it will be necessary to make regular measurements of the patterns of motivation and the quality of engagement in schools.

You can learn more about catalytic pedagogy and how to bring it about on my website, HolisticEquity.org.

I also explain catalytic pedagogy in more detail in my upcoming book Schooling for Holistic Equity: How to manage the hidden curriculum for K-12.

If you are curious about the Back-to-Basics 2.0 strategy that I mentioned at the beginning then check out my video called Teaching with Equity which you can find under the equity heading.