Purpose of Schools:
Academics vs Education

How we understand the purpose of schools will greatly affect how we respond to the controversies of schooling.

After it was recently reported that the state of Florida had rejected “more than 40% of math textbooks submitted for review.”

Robert Pondiscio, an education conservative, pointed out in the title of a post on the Chalkboard Review blog that,

“No, social and emotional learning is not a ‘Trojan horse’ for CRT”.

He calls out the conflict entrepreneur Chris Rufo for his excessive enthusiasm for mistakenly portraying SEL as CRT in disguise.

I interpret his dressing down of one of his own as an opportunity to observe what constitutes the central tenets of conservative educational thinking.

Target Article: “No, social and emotional learning is not a ‘Trojan horse’ for CRT”

Prior Article: Conservative Critique of SEL by Pondiscio

Philosophy of Education Video by Don Berg on HolisticEquity.org

When are Social and Emotional Data Just Vanity Metrics? Video by Don Berg on HolisticEquity.org

I believe that he brings up legitimate concerns about how we should understand the nature of schools, learning, education, and how all these things fit together.

Although I also believe that his understanding is not accurate.

I agree with the following assertions he made:

“It’s a mistake to portray SEL as critical race theory in disguise or a Trojan horse to slip CRT, gender ideology, or Marxist ideas into a curriculum.

There is more than enough room to criticize SEL on the terms offered by its proponents without concocting ulterior motives.”

The political purpose of these assertions is to “reassert public authority over an education establishment.”

And that Rufo’s “SEL critiques are overheated.”

Now herein lies the crux of the matter:

“[W]hether SEL can have a beneficial effect on academic outcomes as proponents insist is an interesting question but a secondary one.

The more important issue is whether monitoring, evaluating, and seeking to shape a child’s attitudes, values, and beliefs is the appropriate business of a school.

Few parents want teachers to be indifferent to their child’s overall well-being.

But at what point does a reasonable healthy concern for students emotional health become too personal, too intrusive, and too sensitive to be a legitimate function of public school and thus the state?”

Changing the Purpose of Schools

Chapter 5 of my new book Schooling For Holistic Equity is entitled Back to Basics, Version 2.0.

Here is a relevant paragraph:

“I respect the underlying concern expressed by educational conservatives.

"These critics are correct that chaos is not helpful and that children need structure.

"However, there are many different kinds of structure.

"If they insist that children need academic structure more than social structures, then we have a more fundamental disagreement.

"What the most ‘radical’ schools that I have studied and tend to favor do is to provide clear and compelling social structures to the point of making academic structures available only as opt-in choices for children.

"In order to have a productive debate about the relative value of academic structures, the champions of educational conservativism need to be clear about what they are promoting as the social structure in which their favored academic structures are implemented.

"I am pointing out that psychological reality makes the social structure, as defined by how it supports, neglects, or thwarts primary human needs, far more educationally powerful than all academic structures.

"If we don’t get the social structures aligned with the support of primary needs, our efforts will be generally ineffective no matter what academic structure we put in place.”

In Pondiscio’s prior article criticizing SEL for the American Enterprise Institute he states, “SEL, which is typically presented as an academic enhancement, not a distraction, carries more cause for concern than is commonly acknowledged.

"It represents a different vision for public education.

"There is a substantive moral message in SEL that is largely unacknowledged, perhaps unwittingly, by its promoters and enthusiasts.

"The bland, pseudoscientific, and somewhat inscrutable term ‘social and emotional learning’ grafted onto the academic effort of schooling masks its nature, which heralds a reimagining of schools and teachers’ roles.

"Advocates insist SEL serves academic outcomes and is thus a natural extension of a school’s mission.”

He and I agree that there is a reimagining of schools and teacher’s roles afoot.

However, where we disagree is whether that reimagining is about adding distractions to already overwhelming teacher workloads or about replacing delusional ideas about learning and education that have plagued schooling for hundreds of years with a more scientifically respectable understanding.

I wrote a whole book to argue the latter.

But you can also get an introduction to my philosophy of education with a video on my site.

"It is teacher-centric, favors a transmission of ‘the best that has been taught and written’ and see schools as institutions that promote character formation and the development of basic critical thinking skills to pass on and preserve Western civilization.” 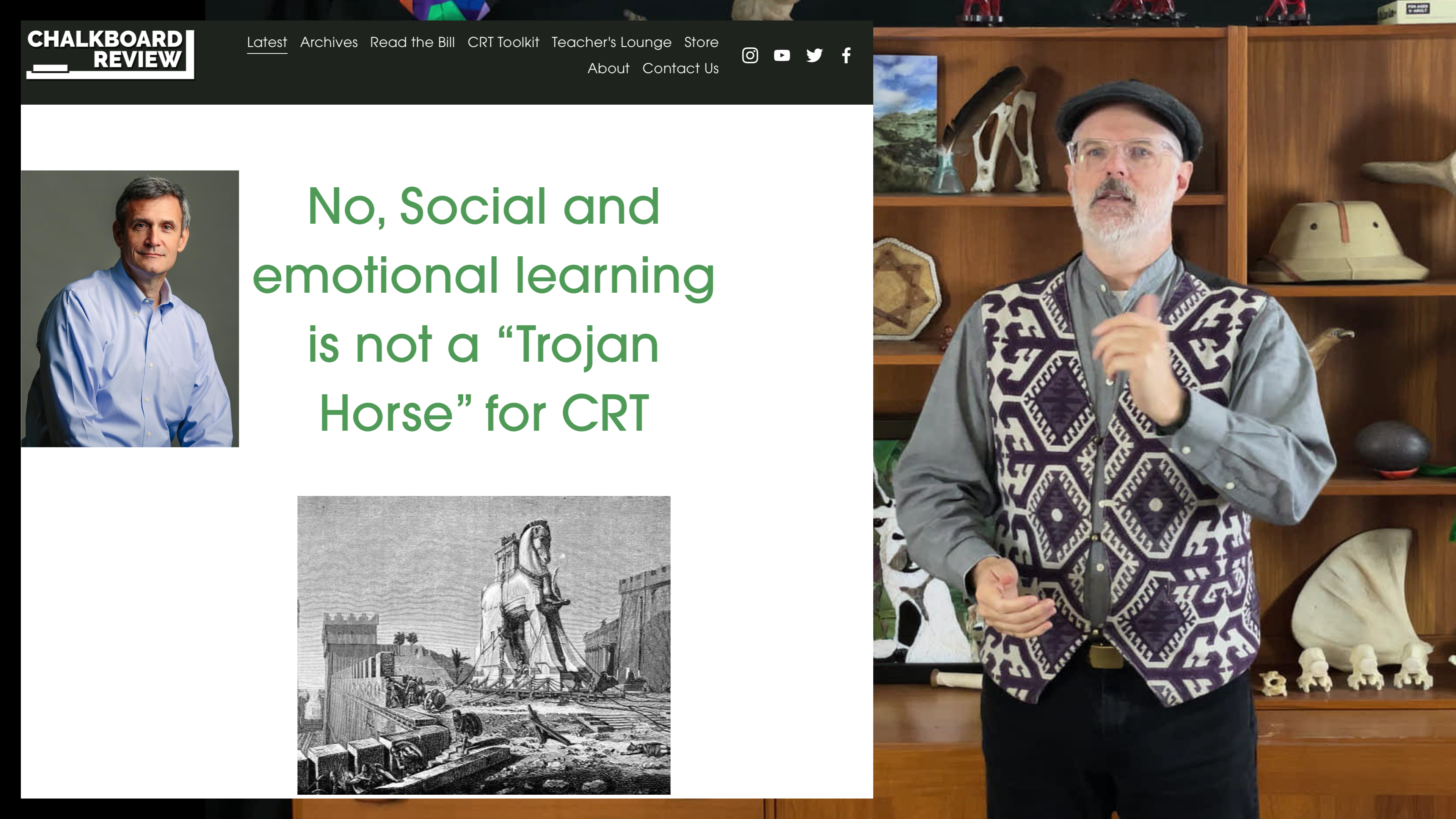 An Alternative Purpose of Schools

To me the central purpose of schools is to ensure that our society has educated citizens who can actively participate in the process of governing society.

I take an educated person to be someone who perceives accurately, thinks clearly, and acts effectively on self-selected goals and aspirations without consciously knowing that those things are going on.

They continuously seek to improve their grasp on reality, even though they can never attain a full and final grasp on it.

The only way that they can achieve improvements on their grasp of reality in our complex modern world is through deeper learning.

And deeper learning is only possible when students and their teachers are engaged with the activities that they participate in.

Our current global school system has been consistently observed to produce disengagement among a majority of both students and teachers.

Both teachers and students participate in activities but too often shallow learning is what they get from those activities because of the ways that the situations in which they participated were socially structured.

Coupled with all of the other more typical indicators, it is clear that the current system of schooling that dominates world wide is not educating people because its most consistent product is fauxcheivements, not real achievements.

Fauxcheivement is when you go through the motions to get the rewards without actually learning the lessons taught.

Even if you take the academic purpose of schools to be central, it is not doing a good job.

Since I take the purpose of schools to be enabling citizens to grasp the reality of their lives, it is even worse.

An Unworkable Purpose of Schools?

Over decades of study and reflection on the relationship between education and schooling I have concluded that the “traditional” purpose of schools that Pondiscio wants to conserve is counterproductive to the education of citizens.

I suspect that Pondiscio would be happy with Back to Basics 1.0 in which teachers deliver the 3 Rs: Readin’, ‘Ritin’, and ‘Rithmetic with enforcement of “strict discipline” and “no nonsense” in the classroom, as in no frivolous activities.

I am open to the possibility that I am wrong about Back to Basics 1.0 being universally ineffective in the classroom, but based on my expertise in the psychology of learning as derived from Self-Determination Theory, I will accept correction only after credible studies show that motivation and engagement are not substantially compromised by those principles.

To be fair I would also like to see similar studies that examine the assumptions made at progressive schools.

While I generalIy prefer the progressive end of the educational philosophy spectrum I am more committed to the scientific notion that empirical data and coherent publicly tested theories that make sense of that data should override personal preferences when it comes to determining the truth.

If the progressive schools are also producing disengagement, then they are just as guilty of bad schooling as the traditional schools.

I agree with Pondiscio that SEL is ripe for criticism.

I do not promote SEL in my book, but I do propose more precisely defined measures for assessing school and classroom climate.

From my perspective as a psychologist it is far more powerful to shape the social situation of the classroom and school than to teach SEL by “monitoring, evaluating, and seeking to shape a child’s attitudes, values, and beliefs.”

Most of the SEL data that would be produced by these processes would be vanity metrics that give school leaders a sense that they are managing something of value, without actually producing any useful results.

I recently made a video called When is Social and Emotional Data Just Vanity Metrics?

In it I lament an Edutopia article that appears to be promoting these kinds of vanity metrics.

Pondiscio is right to be concerned but his particular take on the challenges seems to be more about his skeptical stance toward the State than it is about learning and how schools might be capable of educating children.

To conclude, I understand that there are legitimate concerns that underlie educational conservatism.

However, effectively educating citizens to become active participants in the running of our society means that those concerns need to be addressed from a starting point that takes the science of learning and how schools affect learning seriously.

Traditional schooling does not have any basis in how learning actually works in the real world.

If you would like to read about how certain ways of thinking about the purpose of schooling are misguided I suggest the book Dumb Ideas Won’t Create Smart Kids: Straight Talk About Bad School Reform, Good Teaching, and Better Learning by Eric Haas, Gustavo Fischman, and Joe Brewer.

No matter what purpose of schools you want to pursue, if it is defined with reference to intuitively obvious but delusional ideas about how children learn, then those purposes will not be attainable in any case.

Educational traditionalists, like Robert Pondiscio, who want to conserve the teacher-centric transmission-based Back to Basics 1.0 type of schooling, are deluded by their misunderstandings of how learning works, how teaching can be used to facilitate deeper rather than shallower learning, and how schools can help or hinder teachers in their learning facilitation duties.

For more information about my understanding of learning and how schools can facilitate the education of children through catalytic pedagogy I invite you to check out my site, HolisticEquity.org.