In his TEDx Talk called the Myth of Average Todd Rose introduces us to his concept of designing to the edges.
He starts off with the story of how Air Force jet fighter pilots were crashing at an alarming rate back in the late 40’s and early 50’s.
They were crashing because the designers of the cockpits were using an old set of specifications of the human body dating back to the ancient times of aviation.
Those cockpits were one-size-fits-all based on the average of each measurement on the assumption that using averages would produce a cockpit for a normal person, a person of average size.
Having realized they had a problem they went back to measure again, just in case the pilots had changed in the meantime.
They assumed that taking the middle 30% of the distribution of over 4,000 pilots measured on ten dimensions should give them a bunch of men who were within the average range.
How many men do you think were normal by these criteria?
There were ... exactly ... zero, a goose egg, none.

Another story from the book but that wasn’t in the TEDx Talk is that seven years earlier the Cleveland Plain Dealer held a contest to find the average woman.

A sculptor in collaboration with a gynecologist had created a life-sized statue, named Norma, based on using the average  of each of nine body dimensions based on data from 15,000 young adult women.

Over 3,800 women … regarding themselves as paragons of normalcy … entered.

When they looked at all nine dimensions not a single woman fit the criteria.

They had to go all the way down to five dimensions just to get less than 40 of those 3800 to fit the criteria.

I encourage you to his watch his talk if you haven’t already and read his book, The End of Average.

He tells a variety of entertaining stories to illuminate the discovery that, when you take any six or more dimensions of human variability into account, no one is average.

No one is normal if you take average to mean normal.

Todd Rose’s principle of “designing to the edges” is correct for any endeavor that must confront human variability.

A great example of that principle is education.

The Request from Myth of Average

In his TEDx Talk, but NOT his book, he emphasizes the importance of education technology as a means to achieving the flexibility needed.

He requested that some vague “we” require vendors who sell to schools to design to the edges.

However, even if there was coordinated effort to do that, it would not have enough effect to be worthwhile.

(Although, if technology vendors design to the edges voluntarily that will be better for the humans they serve.)

The “requirement” that he requests is not realistic because the situations of military aircraft procurement and school technology procurement are so different that comparing them is nonsense.

The military consists of a handful of branches that each buy a few hundred planes at a time while there are over 130,000 schools in hundreds of jurisdictions in the USA, most of which make their own independent purchasing decisions.

The massive decentralization of school decision makers means that it is nearly impossible to coordinate the requirements.

Just look at decades of effort that it took to create the Common Core State Standards.

Also take note that they have failed to produce the changes that were hoped for and have been abandoned by seven states, so far.

There is a vast difference between how the Air Force buys a few planes and how hundreds of school bureaucracies buy technology.

And even if coordinated technology purchasing could be done, it would not have much effect.

For the full case against technology as a disruptive influence on education read the book “Failure to Disrupt” by Justin Reich.

His main point is that technology has very specific limitations that make it good at a very narrow range of tasks, none of which are central to education.

Let’s be clear that education is properly about how students and teachers interact with each other and reality.

Technology vendors are irrelevant to those central relationships.

Therefore, it is not even logically plausible for technology to disrupt education, except in trivial ways.

Successfully meeting the challenge of designing to the edges in education requires us to understand what it is that needs to be designed.

Designing Beyond the Myth of Average

So, what is it that needs to be designed?

First of all, using his aviation example as a starting point, we need to know what stage of development education is in.

Aviation as we know it today had to pass through its Kittyhawk stage before it could get to the Jet Age stage.

The pertinent point is that, prior to the Jet Age, designers did not have to think twice about the human dimensions of their technology.

The airplanes prior to the development of jets were not that hard to fly.

Whether or not the pilot fit into the cockpit just didn’t matter.

The designing to the edges work that Todd Rose celebrates in his book is about refining some nuances of the design of highly sophisticated airplanes.

In order for the analogy to be apt, education would need to be in a stage of sophistication that could realistically be called “high.”

Education is closer to the Kittyhawk stage than to the Jet Age stage of sophistication.

To be clear that means schools are at a stage of low sophistication.

Evidence of the lack of sophistication includes that fact that the majority of both teachers and students are disengaged.

There are gaps in both engagement and achievement between minority and majority students.

Education has not achieved a level of sophistication that could be called “high.”

Part of what enabled folks like the Wright brothers to achieve their goals was the development of principles of aerodynamics.

According to Wikipedia, Quote “George Cayley developed the concept of the modern fixed-wing aircraft in 1799, and in doing so identified the four fundamental forces of flight: lift, thrust, drag, and weight.” End Quote.

Cayley’s theoretical breakthrough paved the way for the first powered flight in 1903 by enabling Orville and Wilbur to make reasonable predictions of the thrust needed for their flight.

I believe that education needs a similarly predictive model before the sophistication of the field can progress from low to high.

More importantly we already have that theoretical breakthrough in the form of Self-Determination Theory, even though most educators have not realized it yet.

Myth of Average Governance, Not Academics

With that theoretical foundation in place we need to be clear that the central concerns of education are relationship-based, not information-based, because education is about how students and teachers interact with each other and reality.

If the intuitive notion that education is about information was true, information technology would have been the great disruptor that many folks wanted it to be.

For a book length account of how wrong Wall Street has been about the business of education I highly recommend Jonathan Knee’s book Class Clowns: How the Smartest Investors Lost Billions in Education.

I agree with many prognosticators that education is, in fact, ripe for disruption.

However, the great disruption of education will, I predict, be based on novel forms of governance.

At the risk of sounding monotonous I will repeat my claim that education is about relationships, not information.

Despite intuitions to the contrary, our relationships are far more powerfully shaped by our social institutions than we normally realize.

It will be innovations in the governance of teacher-and-student and student-and-reality relationships that will transform schooling.

Throughout my work I argue that this is exactly what is  implied by Self-Determination Theory.

Thus, the structures that need to be designed to the edges are governance structures, not academic ones.

Todd Rose’s analysis in his Myth of Average video was good, the only problem was that the premises upon which his argument build were incorrect.

The central suggestion from his video about coordinating technology purchasing no longer makes sense since we have posited the new premise that education is primarily about how relationships are affected by governance, not how information is delivered.

His book, the End of Average, is well worth reading because it covers important ground that is not based on the false premise from the video.

Helping educators and school policy-makers understand how to solve the disengagement problem and close the engagement gap using Self-Determination Theory is one focus of my work.

Ensuring that innovative governance structures are supported is another.

For more information about how I am doing these things, visit HolisticEquity.org. 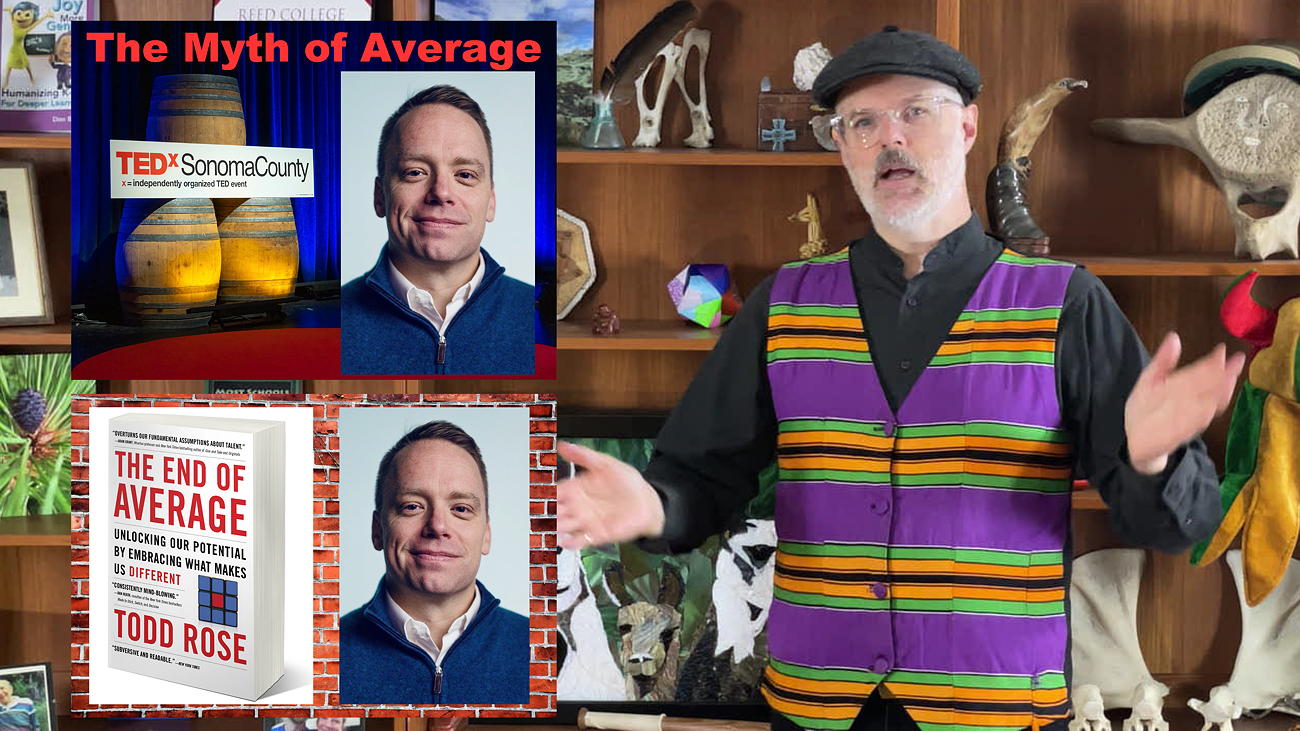